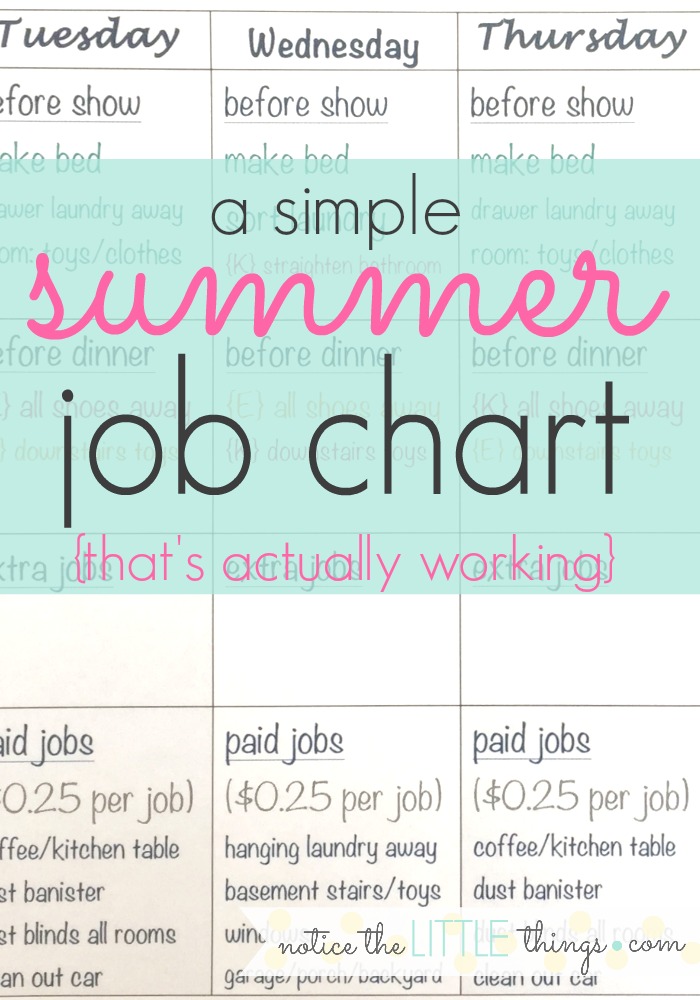 there is nothing fancy about this job chart. but it is working. i’ve told myself countless times, as i look into my kids’ rooms with a deep sigh, that i need to make a job chart. maybe then things will get picked up around here.

but then i think i need to go to the store and get a cute cork board. or dry erase board. at least some card stock. or make something elaborate and pinterest worthy. i’ll admit, sometimes this is the way my mind works. i like creative, pretty projects. and color coding. meanwhile, my eye rolling and sighs continue over the toys that never get picked up without a fight. 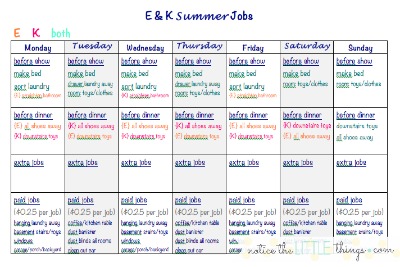 last week, being that it is already july and my goal for summer was a job chart, i decided desperate times called for microsoft word. no. this job chart is not fancy. no. it is not even really picture worthy. but it is working. and that, my friends, deems it worth sharing for any mama out there who just wants someone else to pick up the shoes for a change.

i think there are three reasons this chart has been successful. 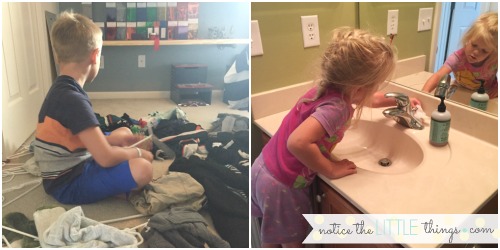 my kiddos are six and four. when determining what jobs to put on their charts, i thought of a million things i’d love done around the house. vacuuming. dishes. floor mopping. the storage room. giving half our toys to goodwill. these jobs might be suitable for older kiddos but would only result in battles with my own aged kiddos. so i stuck with tasks that were manageable for a four and six year old. if you are thinking of making your own chart, keep in mind jobs that are reasonable for their ages. remember, it is supposed to make your life easier.

first, i considered their bedrooms. what bothers me most in there are unmade beds, toys out, and clothes out. next, i thought of other areas around the house that continually bother me. shoes laying around. clean clothes that sit in laundry baskets. toys. clutter on the stairs. the bathroom sink.

with all of this in mind, i made a simple list of jobs for our chart.

once i had our jobs, i added them to a weekly chart. when designing the chart, i tried to make it as manageable as possible. i tried to vary the tasks from day to day. some jobs require teamwork. some are independent jobs. not all days have equal jobs. it’s fun to be able to look forward to a day when you have less to do than other days.

it’s not fun thinking you have an uphill climb. i’ve learned as a parent {and as a teacher} that success often depends on how hard my kids think something will be. or how much time it will take. knowing this, i split jobs into morning and night. more importantly, for the first few days, i helped each child with their jobs, showing them what i expected for each task and encouraging them along the way. 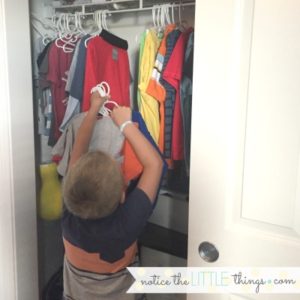 as we’ve implemented the chart, i’ve tried to consider E and K’s personalities when it comes to their jobs. K is the easiest child, until you ask her to clean up. she despises it. E doesn’t like it, and he will complain the whole time, but he will do it. K just goes on complaining. E is independent and likes to get hard things over with first. K doesn’t understand that mentality yet and gives up before she starts if something looks hard. she does better when she feels like she has help. 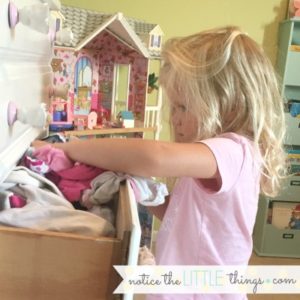 E wakes up in the morning and feels like his three jobs are manageable and does them right away because that’s just how he is. i knew he would do this when i made the morning jobs manageable. when K wakes up, i’d love to just shout up for her to make her bed. but i know that would overwhelm her. instead, i walk up and tell her i will help her get started on her jobs. really i am just upstairs, in and out of her room, doing other things that need to be done. but she sees it as help. with just this little bit of support, she is doing her jobs on her own without complaining.

kids aren’t that different from adults. they like incentives. i knew i needed to build in some motivation to this chart, but i am not huge on elaborate incentives. sometimes things just should be done because it is the right thing to do. so i picked things already in our day and made them into incentives. in the summer, the kids love to watch a disney junior show first thing in the morning with breakfast. with the new chart, before show jobs must be finished before they can watch a show.

before dinner jobs must be done before the kids can sit down to dinner. in addition, if they complain or refuse a job during the day, they have to do the other person’s jobs the next day. i made that part up on a whim and it has been highly motivating. you will see that the before dinner chores aren’t really equal. picking up the toys is harder than putting away the shoes. this way, they look forward to their task every other day and don’t really complain about the harder job, knowing the next day will be easier. {as a bonus, i’ve even heard them helping each other with the toys job because they know how it feels to have the harder chore.} 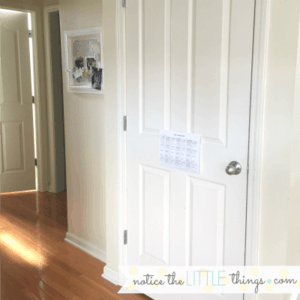 the extra jobs section is in case i need something extra done for the day. like if we are having guests. also, this section is currently serving as a potential summer consequence. if either kiddo is being particularly difficult throughout the day {saying no, purposely annoying the other, talking back, etc.}, i give them the choice of stopping or adding an extra job to their chart. again, highly motivating.

as i said, i couldn’t really put all of our jobs on this chart. it would have been overwhelming for them and hard for me to keep track of. for this reason, i added some paid jobs at the bottom of the chart in the paid jobs section. i wrestled with this one. i didn’t get an allowance when i was younger, until i was old enough to babysit my younger sisters. i am a strong believer in doing jobs around the house because you are a member of the household. but my six year old is continually trying to sell things – things he’s made, lemonade, rocks, origami, you name it – at the bottom of our driveway to earn money. i know. it’s comical. he really wants his own money. so i decided to add some paid options for each day. each job earns a quarter and must pass inspection.

its been a week and a half and i find myself sighing far less. beds are made. toys are mostly cleaned up, and if they aren’t, i know they will be later {and not by me!}. the same old question keeps popping in my head. why didn’t i do this sooner? 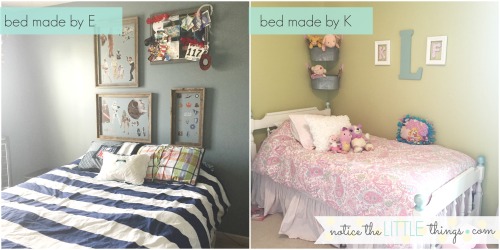 i feel like the kids are finally learning to clean up after themselves. as a type A mama who loves things to be tidy, i used to wonder if it was my fault that they weren’t good at picking up. a lot of times i just do it myself because it’s faster. but as E and K see how much easier their jobs are when they clean throughout the day, i see them doing this now themselves. this means more time for summer fun! 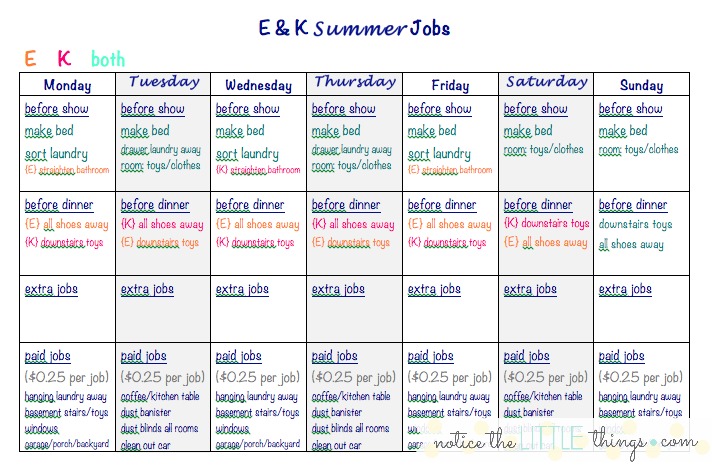 it’s not much to look at, just a piece of paper hanging on our basement door. but this LITTLE job chart is causing big changes around our home. i hope it can do the same for yours. here’s a link to access the chart so you can fill in your own jobs and change the colors into your favorites. 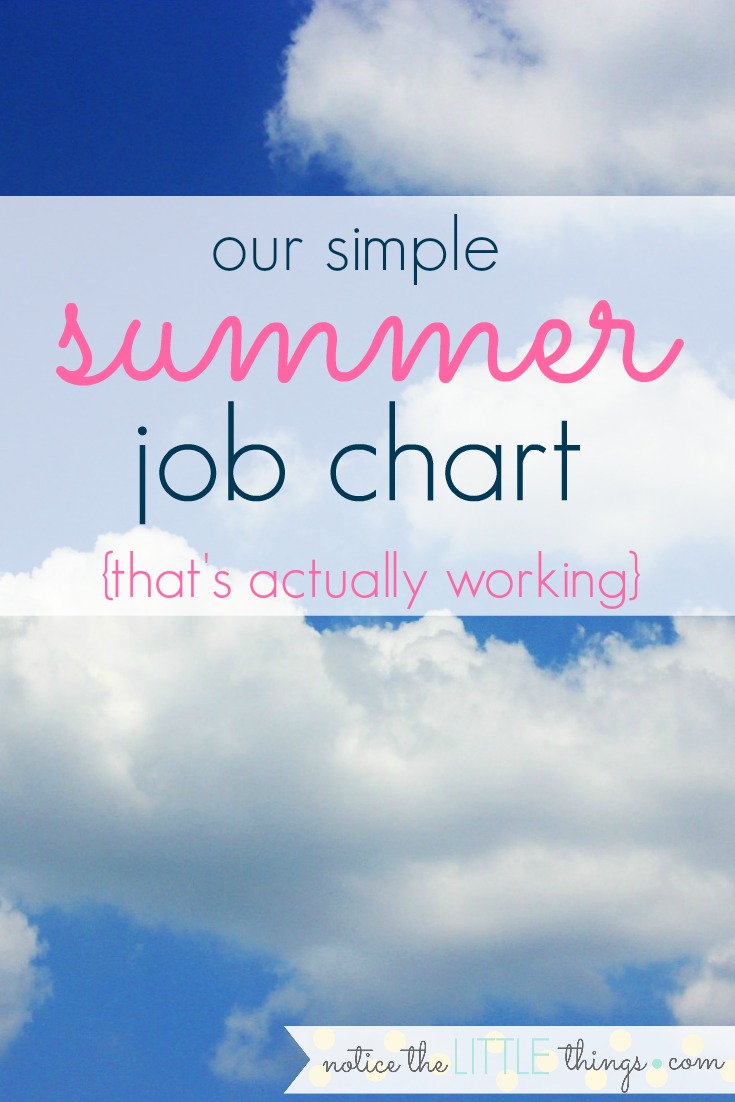 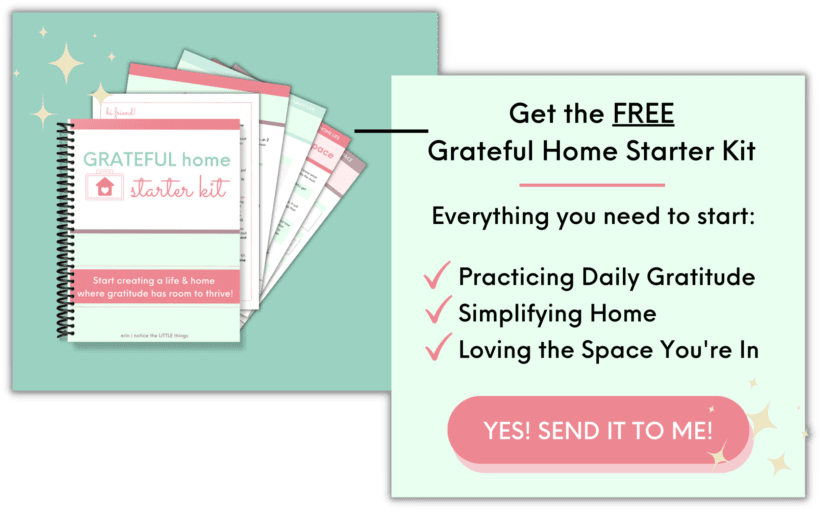 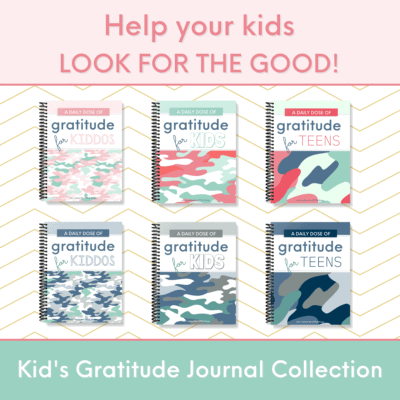 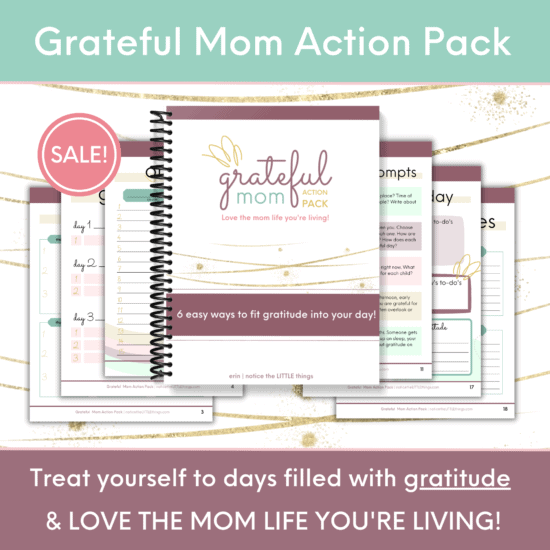 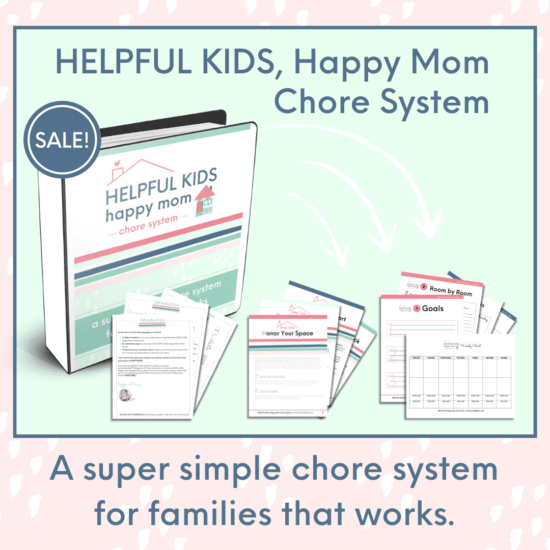 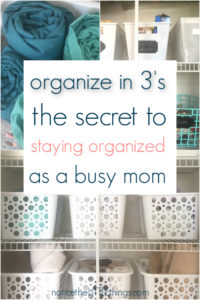 the secret to staying organized 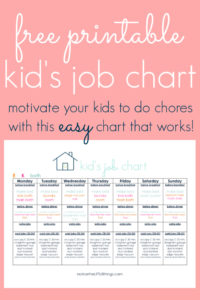 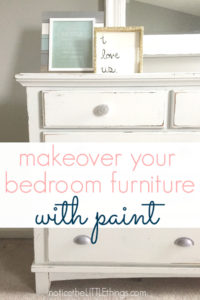 how to paint bedroom furniture 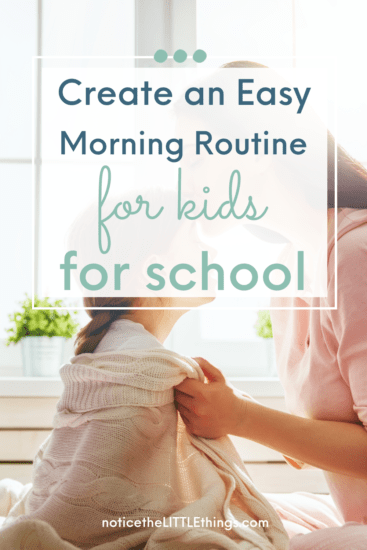 2 Game-Changing Tips for an Easier School Morning With Kids 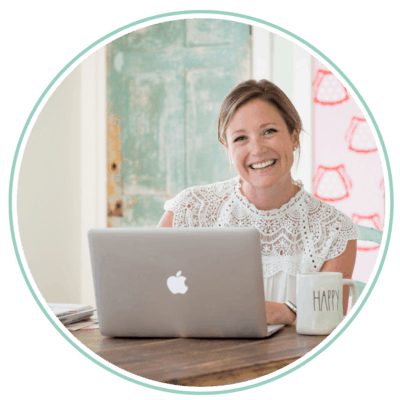 i am a wife, mom, sister, and friend. i am a lover of lower case letters, chai tea, warm weather, and get-togethers. i can't wait to know you better. so pull up a chair, grab something to sip, and join me in noticing the LITTLE things.

This website uses cookies to improve your experience while you navigate through the website. Out of these cookies, the cookies that are categorized as necessary are stored on your browser as they are essential for the working of basic functionalities of the website. We also use third-party cookies that help us analyze and understand how you use this website. These cookies will be stored in your browser only with your consent. You also have the option to opt-out of these cookies. But opting out of some of these cookies may have an effect on your browsing experience.
Necessary Always Enabled
Necessary cookies are absolutely essential for the website to function properly. This category only includes cookies that ensures basic functionalities and security features of the website. These cookies do not store any personal information.
Non-necessary
Any cookies that may not be particularly necessary for the website to function and is used specifically to collect user personal data via analytics, ads, other embedded contents are termed as non-necessary cookies. It is mandatory to procure user consent prior to running these cookies on your website.
SAVE & ACCEPT